Late To The Party

Water, wishes, and more than a few ghosts have called wells home over the years, but in 2015 one well in particular played host to something quite special: the most thrilling game of pinball seen in years…

Why, it was as simple as it was absurd: throw a little retro man down a frighteningly vast retro well, and live just long enough to make the sacrifice worthwhile. As for the reasoning behind such absurdity? It wasn’t immediately clear. For those that accepted Downwell’s challenge, it was found in the hunt for a high score and the captivating test of skill that followed.

But for the game’s developer and his creation come to life? 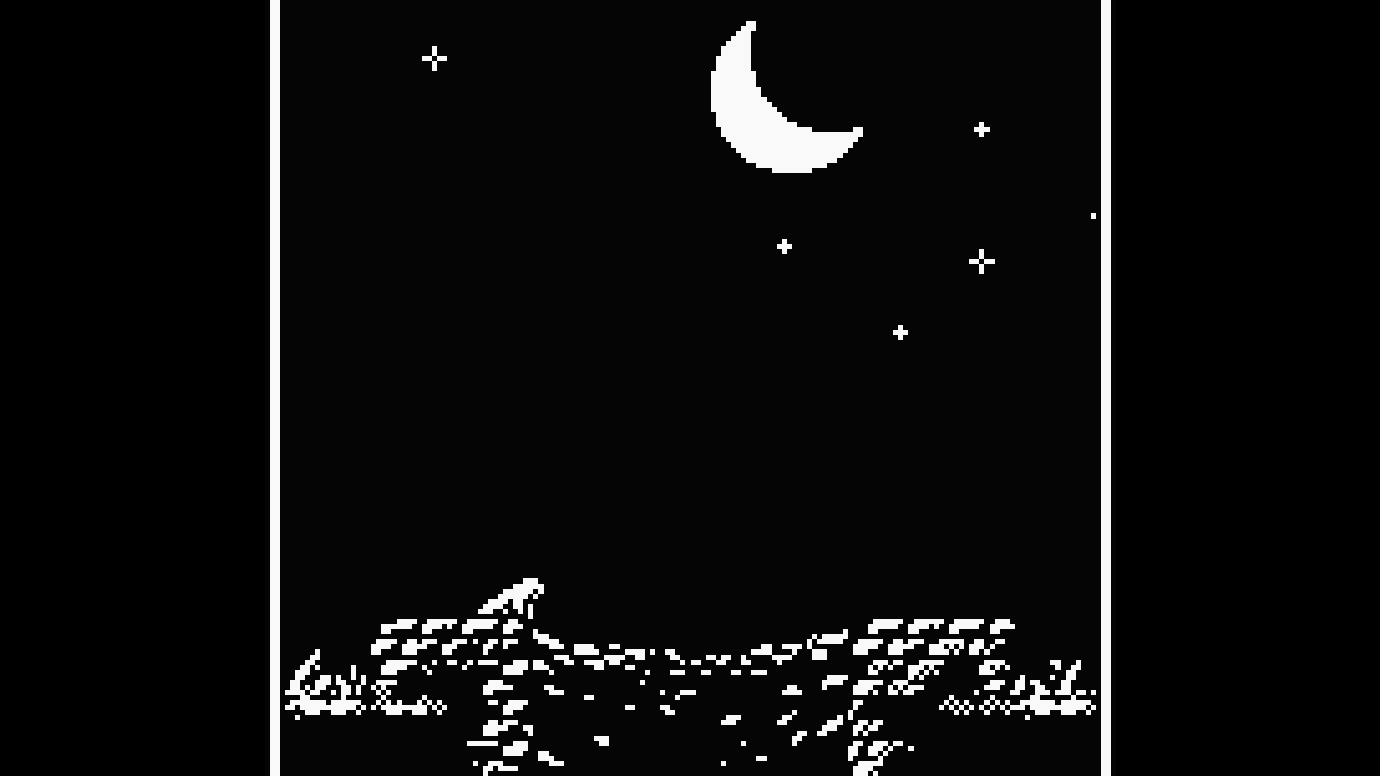 Wells have always been inherently curious things. Constructed from stone and blood and sweat and tears, only a small portion of the months or even years of back-breaking labour is ever seen above ground. As if a Titanic sinking iceberg, or one of Mario’s famous warp pipes. Wells, then, are inherently curious, secretive things.

In 1996, Japanese developer Nintendo found itself in search of a landmark to rebuild its trademark, tunic-clad hero’s world around. The hurried sound of hammers; the bustle of busy feet – some hours into The Legend of Zelda: Ocarina of Time, Link stumbles on the township of Kakariko Village in the very literal process of being constructed, piece by piece, around a well.

One might suggest Nintendo’s decision shares similarities with the tale of the Somerset towns of Wales and Bath, which it’s said were built around ancient Roman springs. Chances are, they might not be far off. Situated mere meters from the graves of Hyrule’s royal family, Nintendo turned down the temptation to turn their well into a grave. Instead, they embraced its ability to test the depths of love and friendship, ushering Link below the soil in search not of fame or fortune but, rather, a friend: Sheik.

In that same year, as the movie ‘Ring’ came to a close, the Japanese horror directors of the time wouldn’t show the same restraint. Here, they’d use a well to test the depths of human resolve and cinema’s love of horror, tossing their film’s protagonist into a well to the enthusiastic cries of filmgoers and critics alike.

Yet for all those that have tested them, and the many reasons they’ve done so, the question of a well’s depth likely remains its greatest secret. It’s a secret so puzzling that over the years, passersby have founded a ritual around it. Pick up a rock, throw it in – counting the seconds as it falls – and you’ll have a good measure of its depth once you hear it hit the bottom. 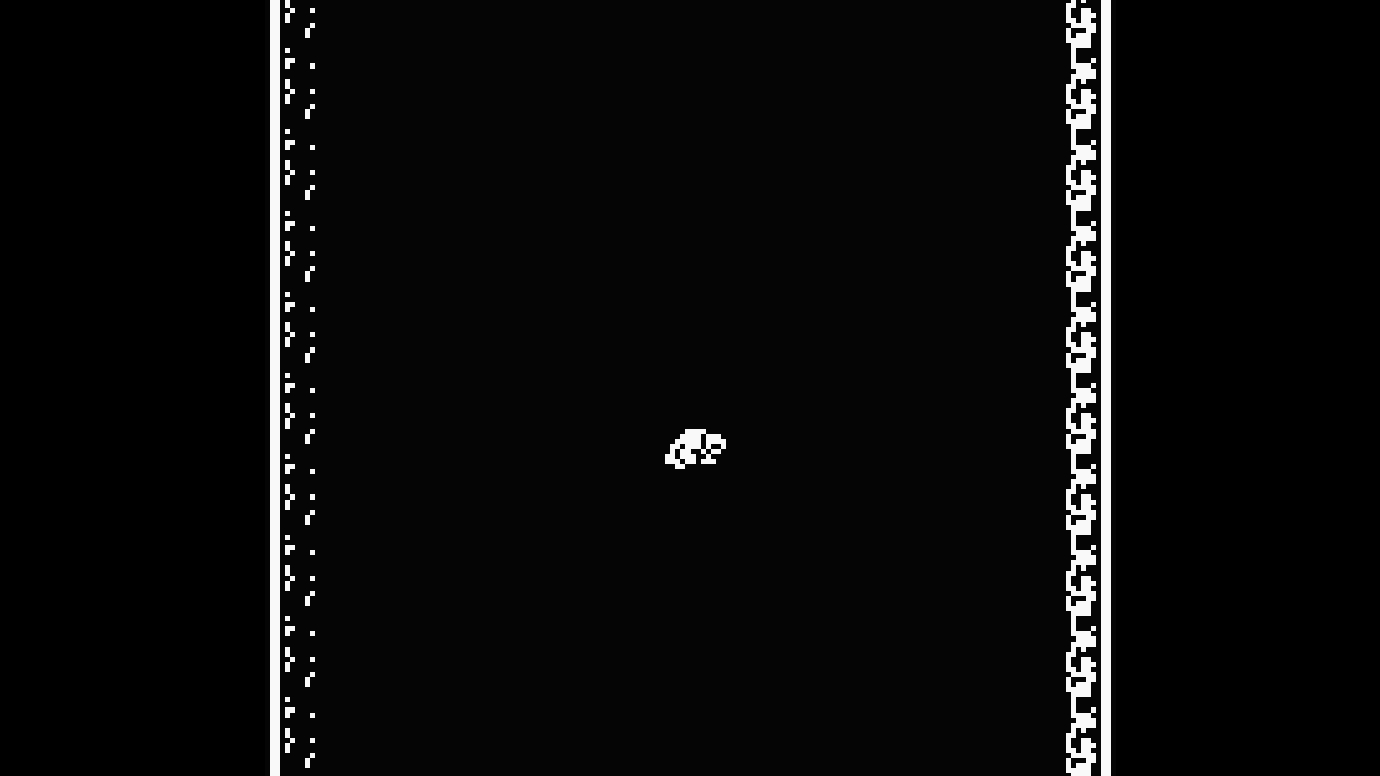 In 2015, Downwell’s sole creator – Ojiro Fumoto – opened his game in startling fashion. With a simple tap of a button, he threw its sole hero into a well with as much enthusiasm as every Japanese horror director to have come before him.

In truth, Downwell’s unassuming protagonist didn’t jump, and wasn’t thrown, so much as he…well, fell. Boot up the game today and its opening menu still implies as much, asking you to choose the style in which you’ll fall and the skills you’ll take with you on your descent into madness.

Will you pinwheel your arms? Perhaps strike a handstand? Or like most when faced with their inevitable end, will you wrap your arms around your legs, assume the foetal position, and rock back and forth as you pinball between the series of increasingly unfortunate events that follow?

“Increasingly unfortunate events”. It’s as fitting a subtitle as you’ll find for the roguelike genre (“Who the hell called them Roguelikes, and not A Series of Unfortunate Events?!”), and this titular well is – at its heart – very much a roguelike, changing in design and construction on each repeat visit. 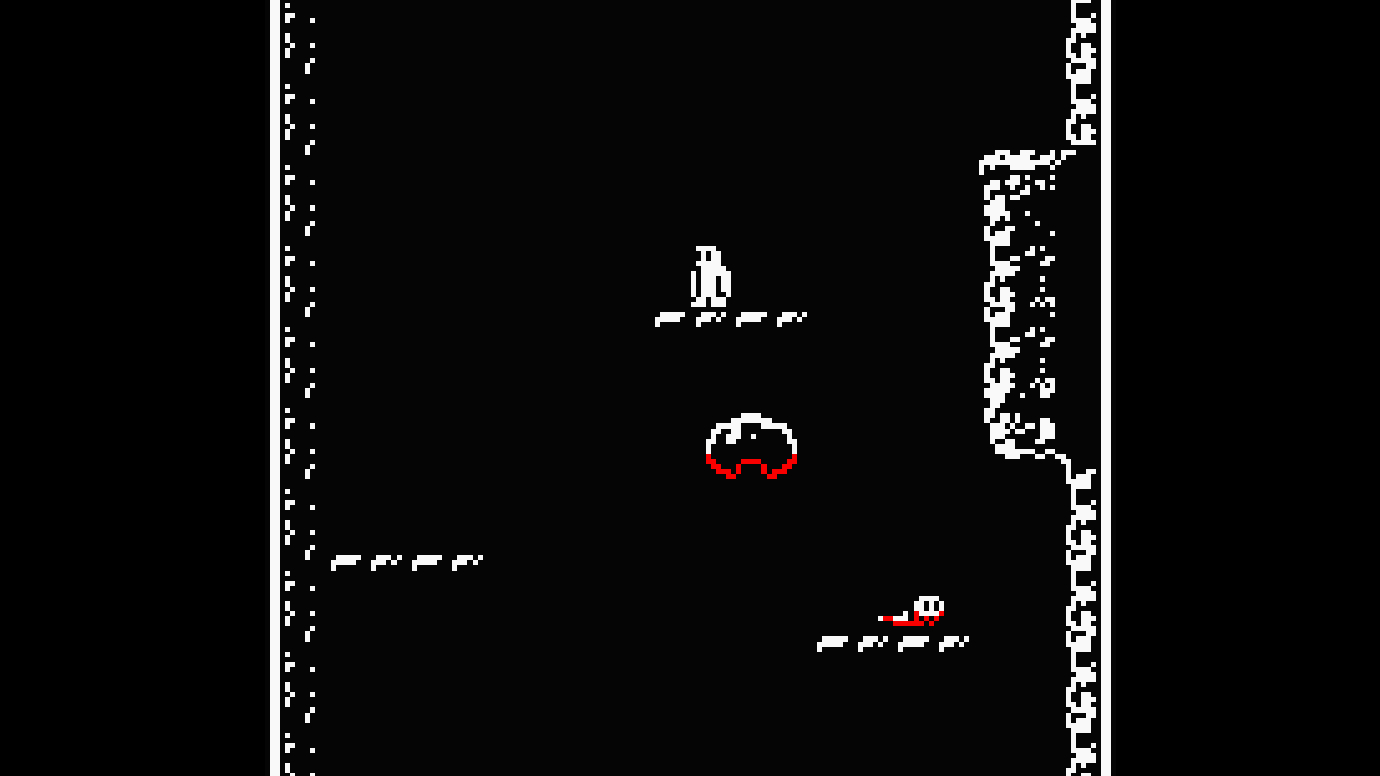 It’s easy to get caught up in the shape-shifting magic trick that is a Roguelike. The way the world shifts. Changes. Yet the true magic is often found in the tales they leave you to tell. Of a specific weapon. A certain secret. A game-breaking combination of items, power-ups, and bosses. They’re also usually the first to mourn your passing as much as celebrate your successes with a ‘You were killed by a skeleton!’ or a ‘You survived for 8 minutes!’ when the journey, inevitably, comes to an end.

“Oh, this one run…you should have seen it!”.

Here though? In this well? Downwell has no time for reverence, celebration, or much of a tale at all. Truth be told, you did just fall down a well without anyone here to tell others of your act of bravery (stupidity?).

It’s a funny thing to consider what one might say if Downwell’s tale was to be re-told. “Did you hear the one about the man who threw himself down a well?”, it might start. “Lounging around above ground, beneath the shade of the pixel tree that adorns the game’s interactive title screen, without so much as a rock in sight,” they’d continue, “curiosity got the better of our protagonist, seeing him testing the depths of this well in the only way he knew how: with his own body.”

At the end of the day, you could chalk it up to curiosity writ large. The same kind of curiosity that may kill a cat (because it jumped down a well, perhaps?), spark the imagination, or as Cara Ellison found back in 2015, even drive a studying Japanese musician to give up his studies and pursue videogame development.

So while this may be a magic well, it just so happens Ojiro’s game shares more than a passing similarity with those Japanese horror directors after all. His game’s hypothetical, and largely inferred story is a morbid, masochistic affair.

This well is also haunted…

These boots were made for falling

Like the wells he’s doomed to fall through for all eternity, Downwell’s protagonist hides a secret of his own: a pair of gun boots. With a single tap of a button, you can use the boots to propel him upward, slowing his descent while firing a shot down into the unknown, guiding him past the monsters that call this well home.

A few years on and this simple yet astounding technological marvel still steals the show, framing Downwell’s hero as more of a Tony Stark than, say, a bumbling bystander. After all, he did invent what Ojiro’s Twitter profile up until recently still affectionately referred to as ‘Shooty Boots’.

Spend enough hours toying with his invention in this old well – delve deep, and deeper still – and you’ll find that this well really is haunted, and to great effect, as you spy the hazy ghosts of other videogames on the way down. Downwell is a vertical 8-bit Legend of Zelda dungeon, complete with Kese-like bats, Stalfos-style skeletons, and caverns that house shop vendors pawning wares that replenish your health and the charge of your gun boots.

It’s a bullet hell shooter flipped on its head, too, where you’re tasked with working your way down rather than up. It’s a Cave Story in aesthetic and that palpable sense of nostalgia. A Super Meat Boy in precision. And it is, fittingly, given its creator’s obsession with the game, a Spelunky in the shared joy it finds in randomly generated levels, the allure of the unknown, and the desire to delve ever deeper.

It’s also, as you commit to chasing high scores in earnest, utterly thrilling. 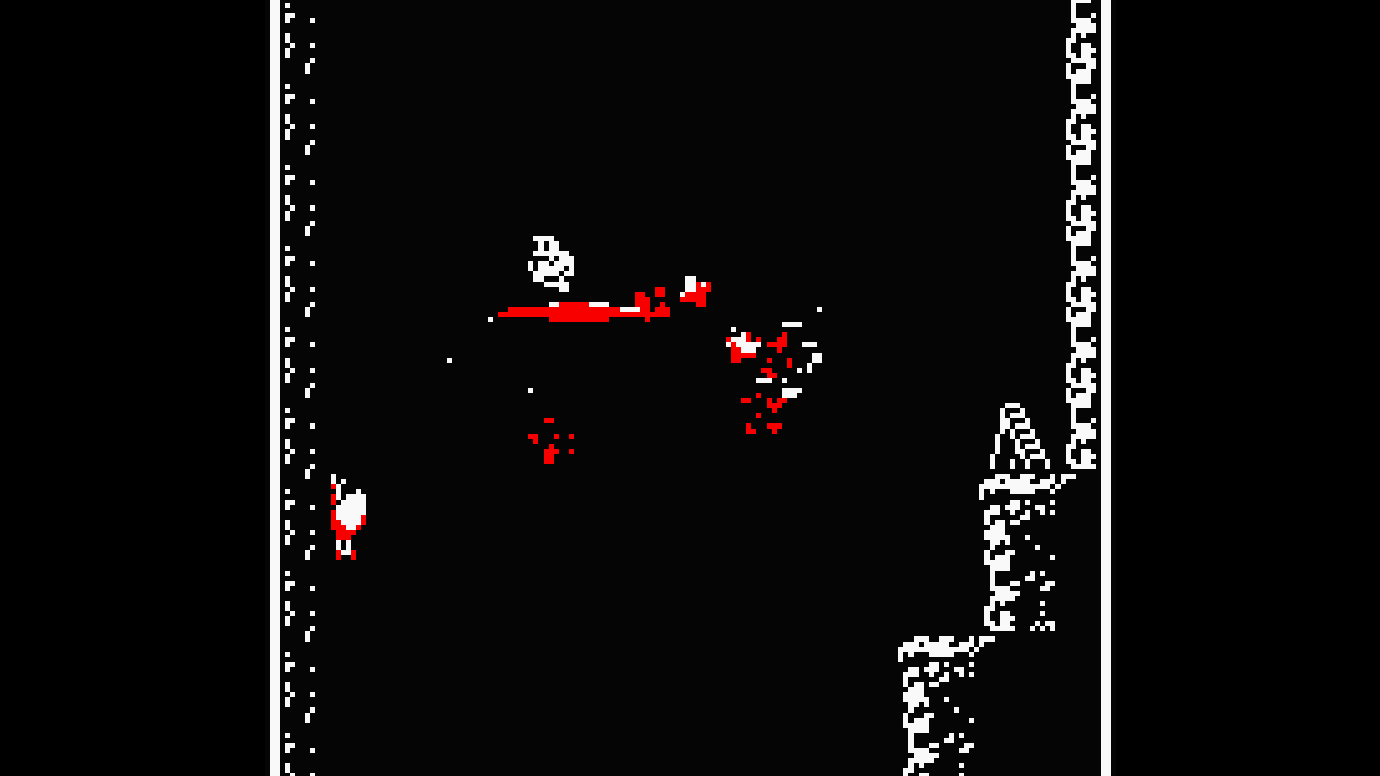 For all this well’s disparate elements, it’s the following moments where it all comes together:

Toss aside the over-reliance on those famous shooty boots, pick the ‘Boulder’ style from that start menu, and bounce off the heads of your enemies like some low-budget Mario impersonator and you’ll soon uncover the most surprising reinvention of a time-honored classic this side of 2010’s Pac-Man Championship Edition DX.

It’s here, as you pinball from one enemy to another, falling deeper ever deeper into – and in love with – this well, that those gun boots are used not as a crutch but, rather, as a means of correcting course with a tap of a button performed with all the precise violence of a fierce nudge of the pinball cabinet.

Tumbling ever further, you start to realise that Downwell’s been counting, much like those passersby, from the moment it tossed you in, measuring the depth of its well – and your progress – not in meters or feet but, rather, the ever-present measurement system of all great arcade games: your high score.

So, the depth of this well?

It’s entirely dependent on your skill.

This is a wishing well, where you throw its protagonist in and wish for a high score… 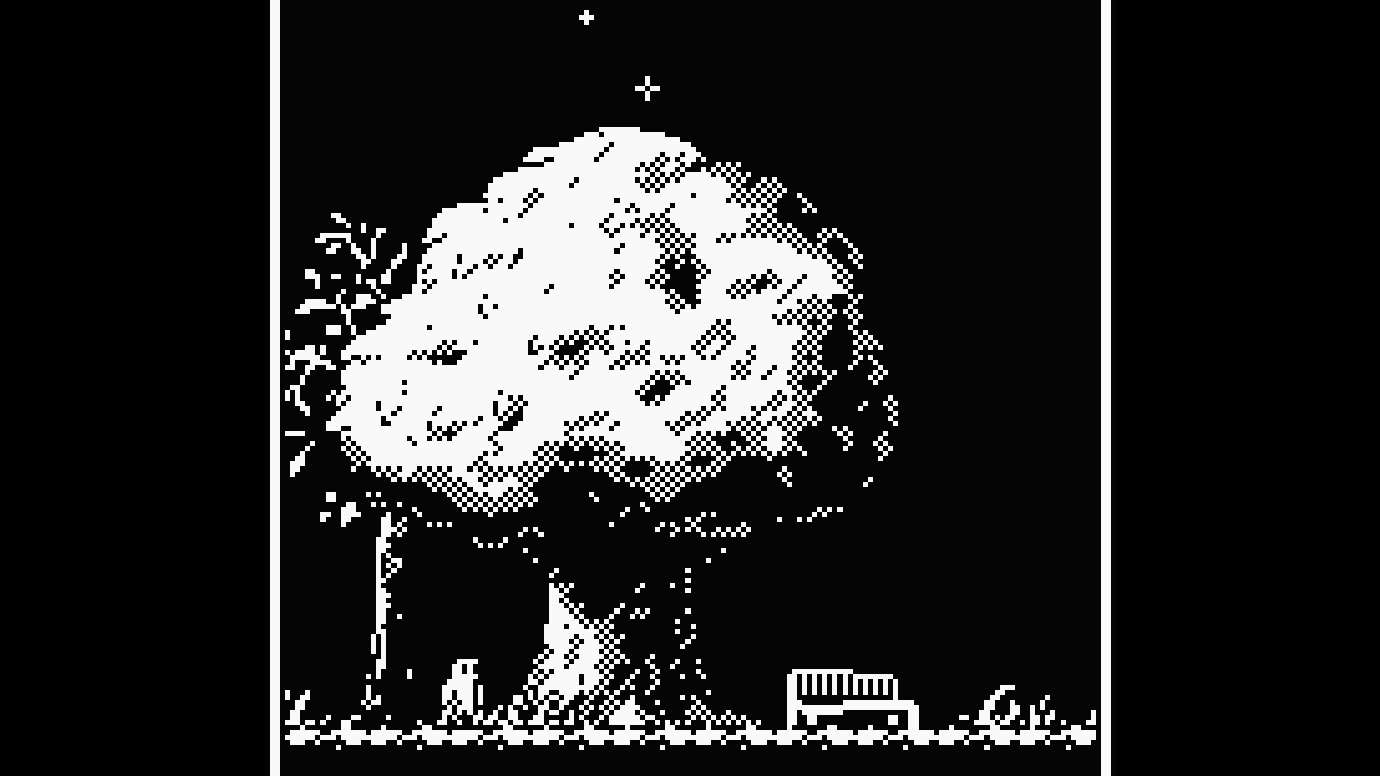 Wells are no strangers to wishes.

Founded on the idea that the water within them houses powerful deities, or had been placed there as some kind of gift from the gods, the story of a wishing well goes a little something like this: Having uttered a wish and tossed in a coin, the guardians of the well would grant this wish based on how the coin landed once it hit the bottom.

Heads up? The wish would be granted. Tails up? The coin would be ignored.

Having traded in study at Tokyo’s University of Arts for a life of games development, ultimately Ojiro throws Downwell’s protagonist into that well for the same reasons a budding tourist throws a coin into one on a rainy day: to make a wish. His wish? To make a stressful career switch worthwhile, and to make a successful game.

Much like a well, the blood sweat and tears of videogame development aren’t always entirely visible above ground or, in this case, at release. There is an inherent risk to testing these depths, with the success or failure of Ojiro’s wish all hinging on his game’s – and its protagonist’s – ability to stick the landing. He needed a head’s up.

And he got it. All at once Downwell’s developer tests the depths of a virtual well and a single, simple gameplay mechanic, uncovering a kind of high score obsession in the process that to this day is reserved for some of this genre’s greatest names. Downwell among them.

This well, then? It is curious, as all wells are. It is magical, like only a roguelike could be. It’s haunted, with the ghosts of past attempts. It’s a wishing well, for its developer and its hero. Most of all? It’s the best game of pinball released in years, its hero the ball and this well the machine.

As for the question of whether you throw the game’s protagonist down again once he meets that untimely end?

That’s a decision as simple as it is absurd: of course you do. 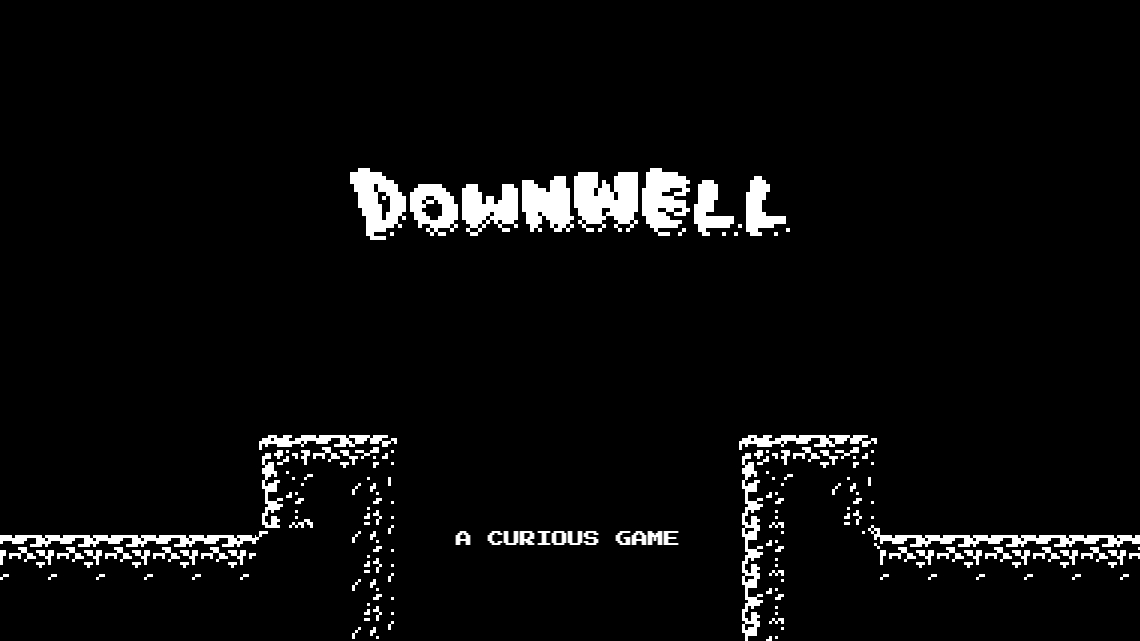