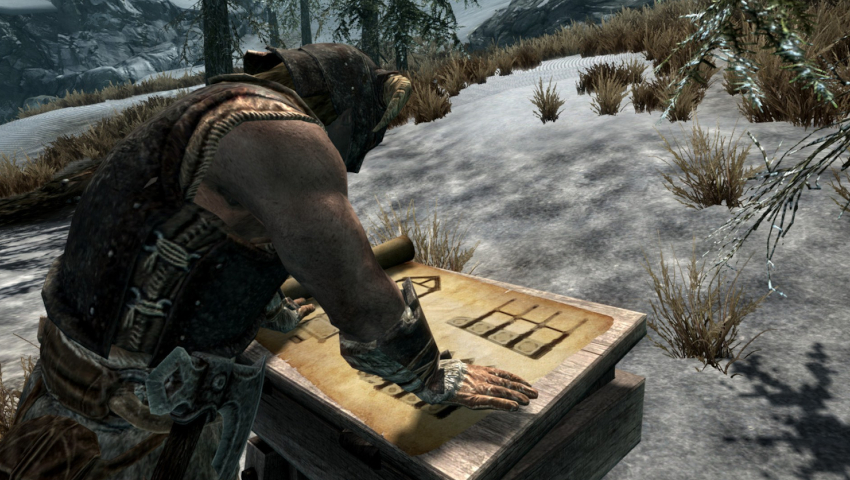 The Elder Scrolls V Skyrim: Hearthfire & The Quest For Home

Forget Solstheim, Vampires, and Werewolves. Bethesda’s latest DLC simply offers you a place to live, but its attempts to tame this series’ lone wolf of a hero feel a lot like a cage…

Shackled, bound, yet still resolute, a Nord sits in a rickety cart among Skyrim’s frozen foothills. As the opening credits to Bethesda’s latest open-world adventure play him in, he embarks on one last journey accompanied by three fellow prisoners who all share his fate: execution.

It’s in these, his final moments, that he offers words of comfort:

“A Nord’s last thoughts should be of home…”

Little does this Nord know that he’s speaking in the company of you, a Dragonborn: a saviour by any other name, as every Elder Scrolls game past, present, and future is destined to feature. Whether you’re an Argonian, Dark Elf, or Breton, Bethesda has a storied history of dragging its would-be saviours of Tamriel from their true homes and thrusting them into the role of a modern videogame hero; a life filled with busy work and menial tasks, to the end of their days.

As that cart rattles along, the Nord speaks to comfort his fellow companions, but it’s more than that still. For all of Skyrim’s Norse-inspired mythology, this phrase is best placed as their interpretation of “Home is where the heart is.”. So where then, in Skyrim’s opening moments, is your Dragonborn thinking of as home?

It could be this series’ past locales. Perhaps. Yet you won’t find the likes of the Imperial City here in Skyrim; 2006’s Oblivion and its capital city may only be a few hundred miles away, but it’s also stuck some ten years in the past.

…where then, in Skyrim’s opening moments, is your Dragonborn thinking of as home?

Nostalgic players won’t find a Seyda Neen here, either, which is still considered by many to be this series’ most comforting home of all. It was a home that, in The Elder Scrolls III: Morrowind, welcomed you to Vvardenfell’s shores with a “Greetings, Outlander!” before hailing you as its saviour some hundred hours later as you stumbled upon this quaint village again.

In fact, you won’t find a comforting starting location of a home at all in Skyrim. Bethesda’s latest stages its opening act in a nondescript fort high amongst the mountains. Guards squabble, prisoners object, and just a few moments later all is set ablaze by the Dragons you’re destined to chase for the coming 30, 40, 50 hours if not more.

Skyrim quite literally tosses you to the wolves, and sets you on your journey without any form of a home to think of. Which makes Skyrim, intrinsically, a homeless place.

So, back to that question: Where is a Dragonborn’s home? It’s easy to profile, if impossible to place. It lies, as every one of cinema’s great adventurer’s does, in the crypts of once grand kings. You’ll find it among Dwemer ruins too, which turn experienced players nostalgic for Vvardenfell’s Dwemer caves (there’s a good reason Morrowind remains a fan favourite, and its Dwemer caves is one of them).

Finally, if the phrase rings true, a Dragonborn’s heart – their true home – lies in the heart of every Dragon that darkens the sky. It would follow then that the true home of the Dragonborn is the same as that of Skyrim’s Dragons; always just over the next horizon.

It’s why Bethesda’s attempts at capturing that heart in Hearthfire are puzzling at best. Purchase a plot. Work the land. Gather materials. It’s busywork for busywork’s sake. You’ll need to do it, though, if you want to successfully plant permanent roots and escape Skyrim’s already unnaturally quiet cities, swapping the stone heights of Markarth or the thief-filled piers of Riften for quieter vistas.

And what would a house be without a family to fill it? You can obtain one of those, too, with the chance to adopt a child of your own, to care for and to look after even as the hours pass and your heart yearns for new adventures.

Hearthfire’s attempts to define the home of a Dragonborn are as commendable as they are in vain, then. This DLC, this new home, and this family are distractions meant to brace a hero for the day they – and any developer of an infinitely-playable open world game – fear the most: retirement.

The day when quest logs run dry, and you find yourself thinking of home.

Wherever that may be.