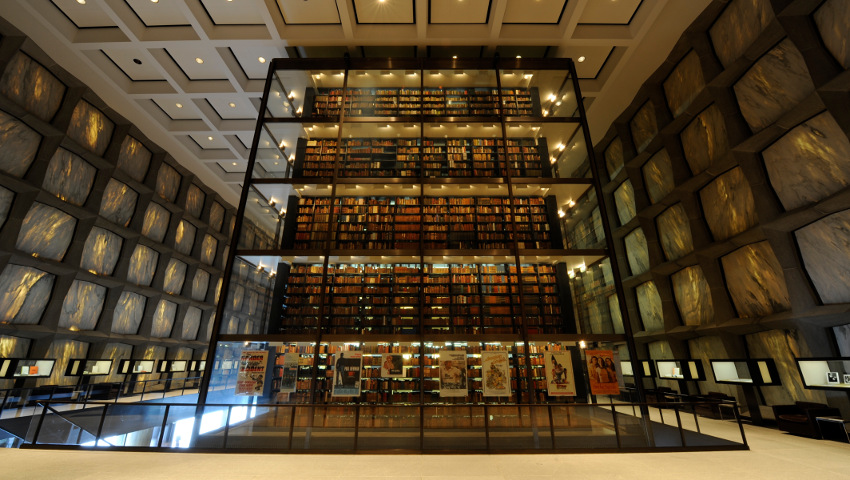 Designed by architect Gordon Bunshaft and completed in 1953, the Beinecke Library is one of the largest buildings in the world devoted to the celebration of rare books. Located in New Haven, Connecticut – on the grounds of Yale University – to wander through its doors is to take a step back in time. Wander just a little further, to the centre of the building, and you’ll find a glass tower filled with books: a towering glass monument to the pre-digital era.

Videogames don’t have their own Beinecke. Not yet, at least. Though it’s not for want of trying. Kickstarted in 2011 and opened in 2016 – some two years ahead of schedule – the National Videogame Museum remains the closest we’ve come, undertaking the long and thankless journey of cataloging the 1s and 0s that make up this industry. 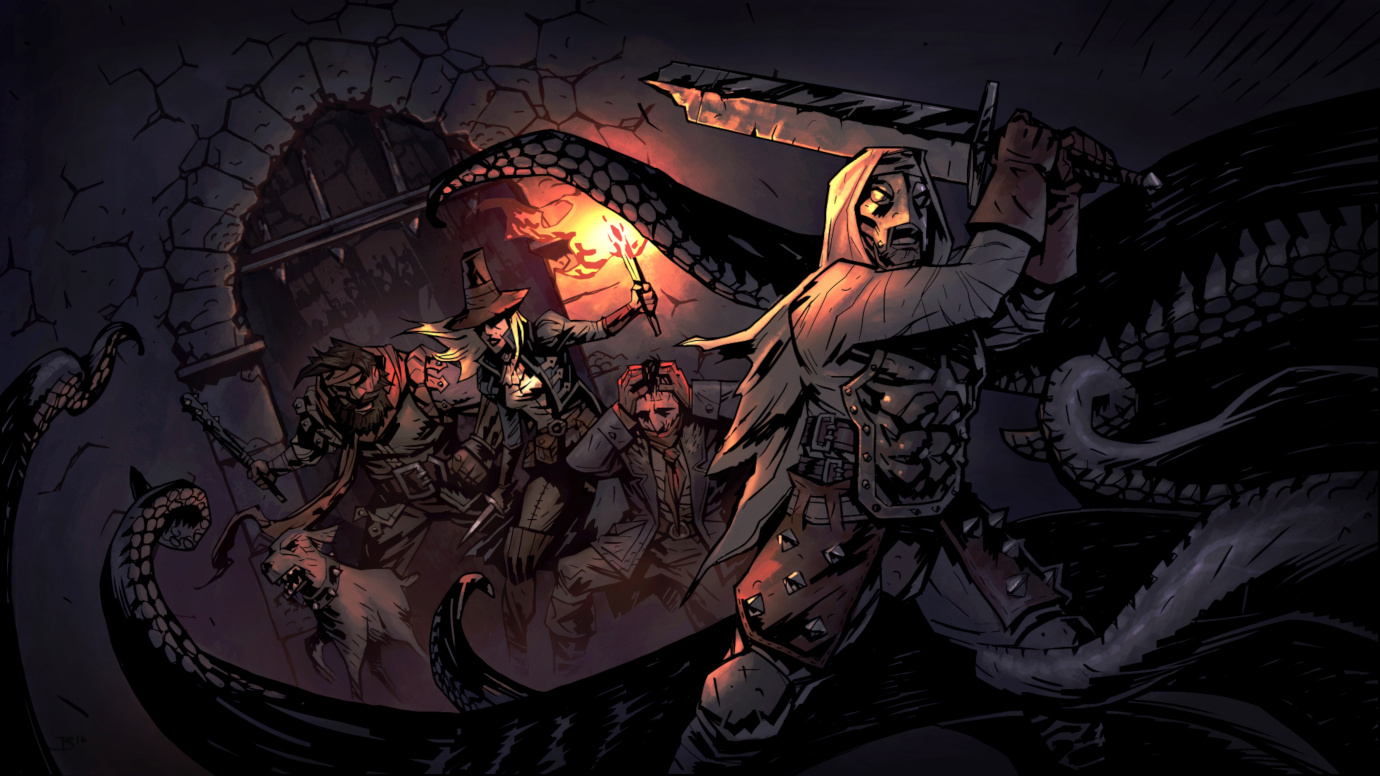 Launch Darkest Dungeon for the first time on Vita, with a swipe and a tap of the touch screen, and it can feel very much like opening one of Beinecke’s books. To be fair, the act of starting Darkest Dungeon – since its release into Steam’s Early Access – has always felt like sliding an old book off the shelf. A massive tome of a thing, to be precise. Dusty, voluminous, and full of lavish artworks, scarred and worn and altogether imposing. Yet if launching it in the past was an act of playing, it’s here, on the Vita, some 22 months since it’s initial release, that we finally get a chance to open it.

The difference may sound trivial. It’s the same game, right? So it would follow that the prevailing theory on handheld ports would condemn it to a lesser experience. Not so. While Darkest Dungeon may not yet have a physical release (it’s a leading candidate for a future Limited Run Games release, certainly) this rare opportunity to hold its world in the hand is a transformative experience.

Darkest Dungeon has always felt tactile in a way few other games do. Textured, graphic, and altogether impactful. Yet never before has Darkest Dungeon felt more like an ancient, haunted tome of a thing than here on the Vita, where its stunning OLED screen brings the horrors of its world to life with startling clarity.

…the adventurers of Darkest Dungeon and the Vita share a common, morbid similarity: both have been sent to die.

What a gorgeous thing this game is to behold.

There’s more than a small sense of irony to the idea that Darkest Dungeon should feel most at home on the Vita. The story of Sony’s latest – and likely last – handheld is a Shakespearean tragedy of the modern videogame era: a promising system doomed by its creators to pass into memory. Much like you, the player, doom the adventurers Darkest Dungeon places into your care to nothing more than an untimely death. In this way, at least, the adventurers of Darkest Dungeon and the Vita share a common, morbid similarity: both have been sent to die.

In truth, the adventurers that take on the challenge of the Darkest Dungeon don’t go down without a fight, if you play well enough. And neither, it seems, does the Vita. Its heart still beats, if you listen closely enough. So while Darkest Dungeon may not be the Vita’s swan song – the game to hold that honour may well still be in development – it’s more than a little fitting that Red Hook Studios’ relic of a game feels most at home on Sony’s forgotten relic of a handheld. 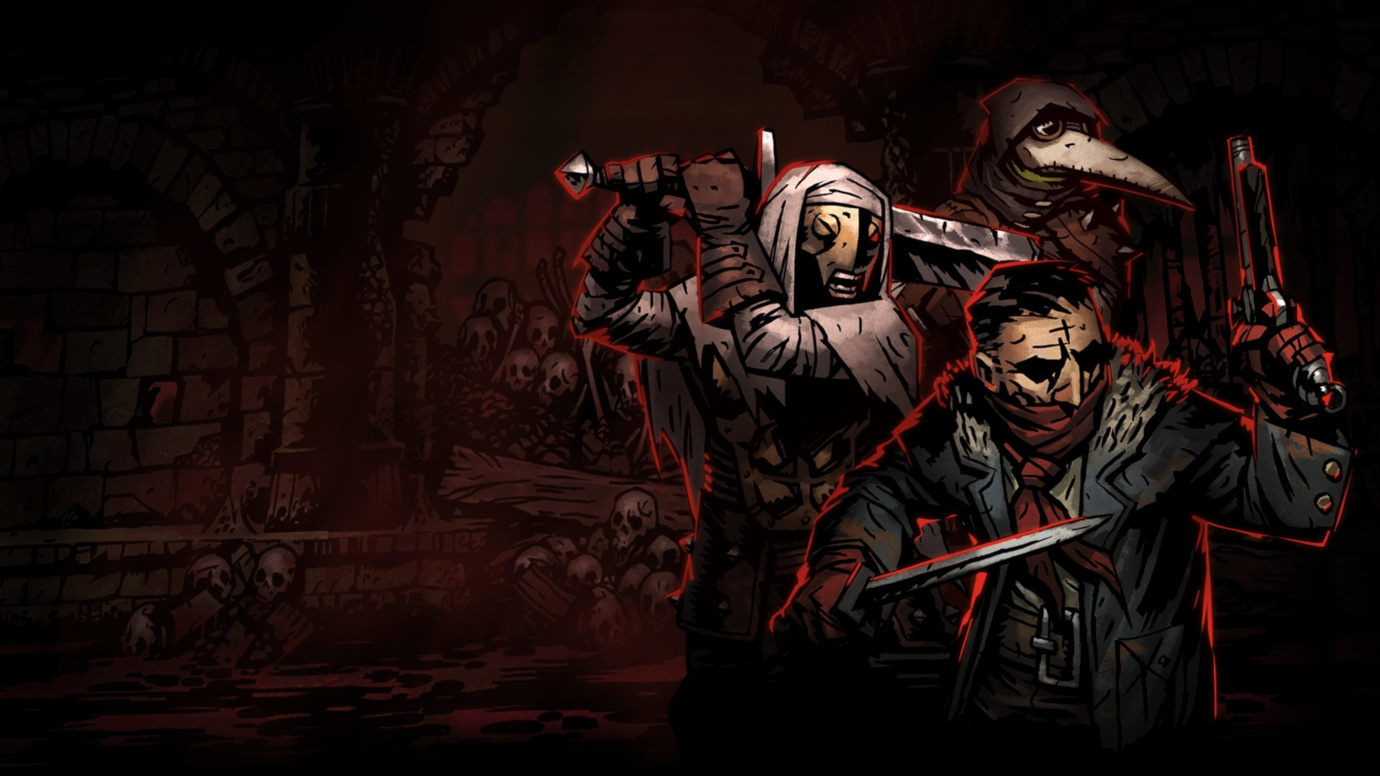 Drag the Vita out of a box, the back of the cupboard, or – heaven forbid – the attic, blow the dust off of it as you would an old book with a typically exaggerated breath (poof!) and you’re in for a treat. A man, ragged and aged, hurriedly pens his last will and testament. Monsters, both dark and devilish, step out of the dark. All while the narrator barks to life, speaking in comforting tones that soothe the ears like an aged whisky soothes the throat. It’s an introduction that you’ll be hard pressed to skip on each return visit, like the forward to a good book, before you settle in for what is best described as Adventurer Mismanagement Simulator 2016.

All told, it’s an experience that evokes the same kind of typically exaggerated praise that’s been written in favour of physical books (The characters jump from the page (screen)!), in the continuing fight against the digital revolution. At the same time, it’s also a fitting argument for why, in the coming years, the allure of physical media may yet witness a resurgence.

…Red Hook Studios’ relic of a game feels most at home on Sony’s forgotten relic of a handheld.

Darkest Dungeon is an aged book of a game on an equally aged and, if Sony and much of the games press is to be believed, long dead piece of hardware, yet oddly enough the marriage of the two is, if possible, the best way to experience it.

Only a handful of creators have mastered that art of marrying game and hardware so effectively over the years. Take the Metal Gear Solid series, for example: Hideo Kojima’s fourth-wall-breaking masterpieces have always been praised for their hardware gimmicks like swapping controller ports, changing the channel, and other fourth-wall breaking ingenuity. There’s Eternal Darkness, too, with its save screen that would prompt unassuming players to wipe their progress.

They’re the kinds of creations you could imagine taking top billing in a videogame museum, held as a shining example of the best this medium has to offer (alongside, it must be said, a large majority of the experimental and indie titles of our time that break the mould as well as Kojima breaks the fourth wall).

Mobiles and handhelds were once home to similarly captivating marriages of hardware and software, from Nintendo’s little dual screen device that could, to the iPhone’s revolutionary touch interface. Yet in recent times the advantages of these platforms have largely been relegated to ‘convenience’ and ‘portability’, as their magic tricks become nothing more than party tricks and gimmicks. 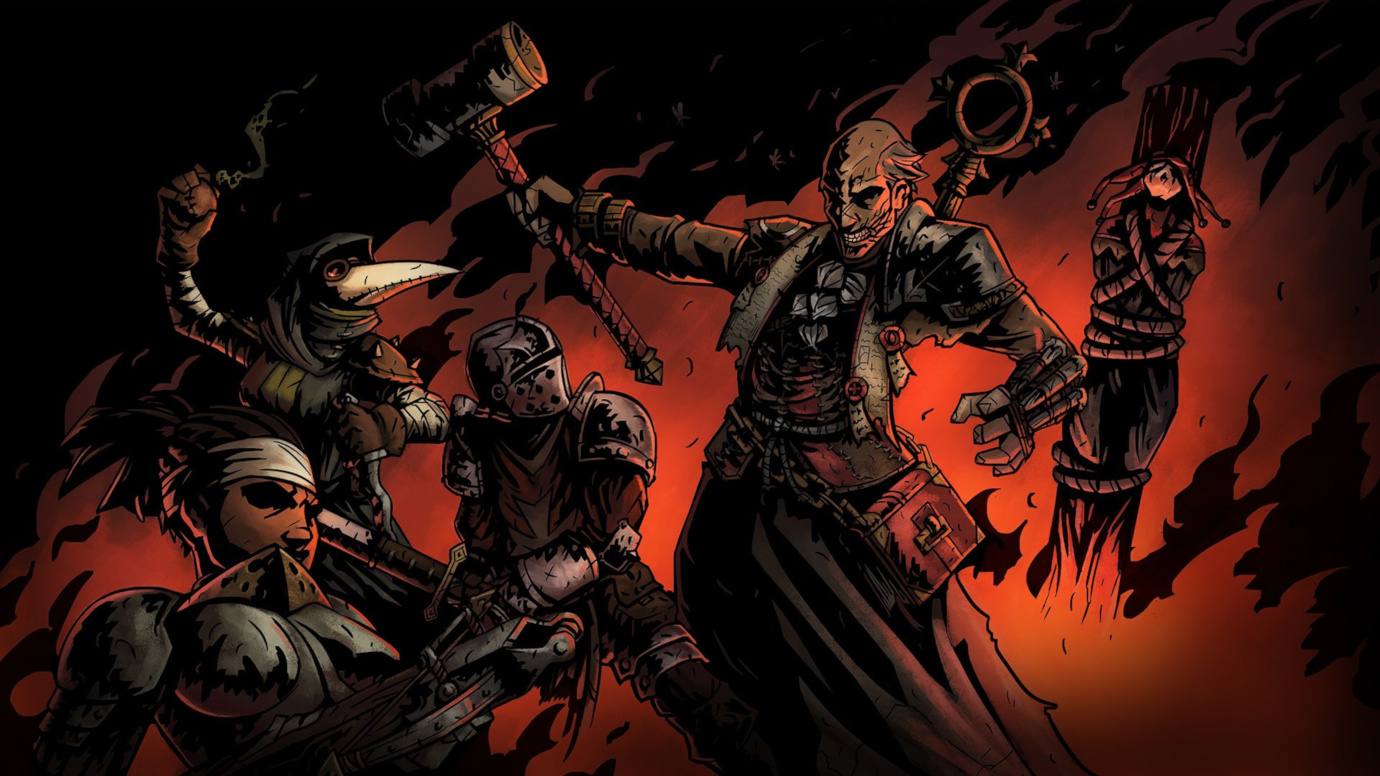 In its move to the Vita, Darkest Dungeon shatters that trend. The platform manages to breathe new life into the horrors and depravity of Darkest Dungeon like no other platform has. Or, more accurately, no other platform could. That’s the real magic trick of a portable system: the ability to heighten an experience, or at best completely transform it. It’s a fitting outcome when you consider that the Vita’s name quite literally translates to the Latin word for ‘Life’.

So no, videogames don’t yet have their own Beneicke, or a glass tower in which to preserve this industry’s finest. But with its release on Vita, Darkest Dungeon has been given a rare opportunity to sit behind the just as celebratory protective glass of the Vita’s stunning OLED screen, where Sony’s overly expensive memory card plays host to some of this industry’s biggest names, most beloved games, and famed creators of our time.

A place where, on a day some years from now when Sony’s console has long since been pronounced dead, you could drag it off a dusty shelf like some rare book of a game, step back in time, and appreciate it like the day it was released.